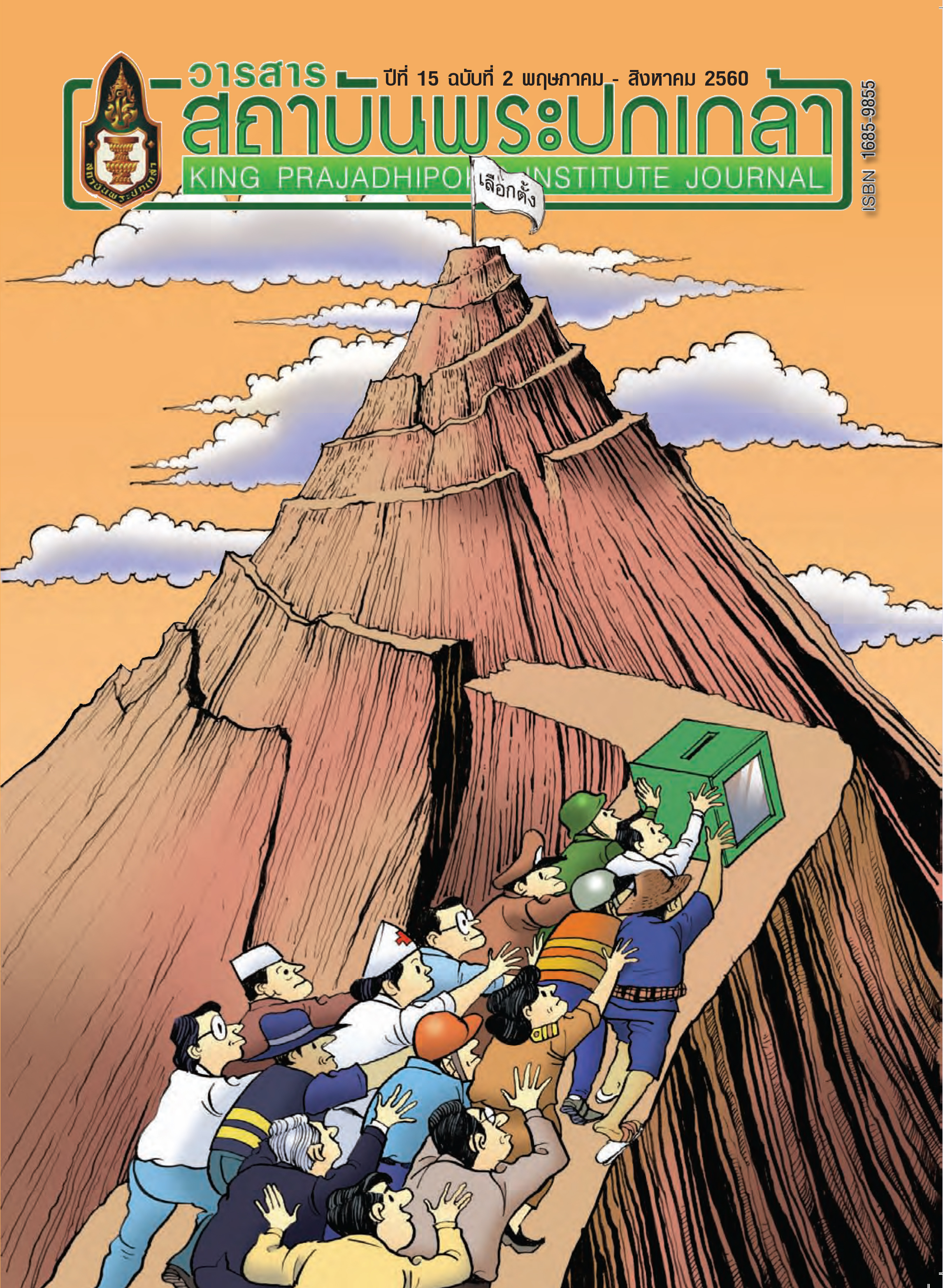 The aim of the research is to study 1) attitudes of citizens and political parties toward Thailand’s reform in the transitional period; 2) attitudes of citizens organized by citizens’ backgrounds; 3) national sources of power that support Thailand’s reform; and 4) expectations of citizens and political parties. A mixed methods approach was used. The quantitative Taro Yamane formula was used to select a sample of 1,100 citizens over six regions with an approximate confidence level of 95% and deviation of 5%. Data from questionnaires was analyzed by percentage, arithmetic mean, and standard deviation, while hypotheses were tested using t-test, F-test, and Pearson product moment พฤษภาคม - สิงหาคม 2560 correlation coefficient. Qualitative data was obtained by in-depth interviews with the leaders or representatives of eight to ten political parties.

The research results indicated that the majority of respondents were female, aged from 18 to 30, lived in the Northeast, had bachelor level education, declared occupation as employee, and had salary income of 15,000 baht or less. From interviews with representatives of eight political parties concerning policy/ideology, informants mostly aimed for a democratic authority and wanted politics that was truly of the people. Expectations for reform of Thailand found that citizens wanted good politicians with morality and hope for good politics and economic development. Most political parties expected there would be strict enforcement of the laws, and efficient prevention and prosecution of corruption. Regarding national power that supports Thailand’s reform, it was found that citizens mostly accepted national power in overall average value was at high level, the highest order is Military power, followed by social power and Politicak power, respectively. Most political parties thought that real power comes from the people or social power. Attitude towards Thailand’s reform showed that citizens have a positive attitude towards both the establishment of military government to reform
Thailand and Thailand’s reform in various fields. In contrast, political parties have a negative attitude or disagree with the government troops, and say the reform of the country in various fields is difficult to achieve and should be done in a democratic way. Expectations towards Thailand’s reform were that citizens mostly expected about the reform of Thailand in overall average value at high level , the highest reform priority is reform and combating corruption. Most political parties’ opinions on Thailand’s reform in other fields; the military government should revise the Draft Constitution as Universaland create reconciliation, including reform to enforce the law against corruption. Results of hypothesis testing showed that 1) the differences in background of citizens’ gender, age, educational level, career, and salary income are associated with significant differences in attitude of citizens towards Thailand’s reform in the transitional period. Difference in domicile had no significant relationship to attitude; 2) national power that supports Thailand’s reform and attitude of citizens were related at a medium level in the same direction, especially the Military power which was in highest medium level correlation. Research recommendations are that the government should listen to and recognize the highest expectations of people and political parties, should rapidly solve problems, and should undertake corruption suppression strongly and effectively.