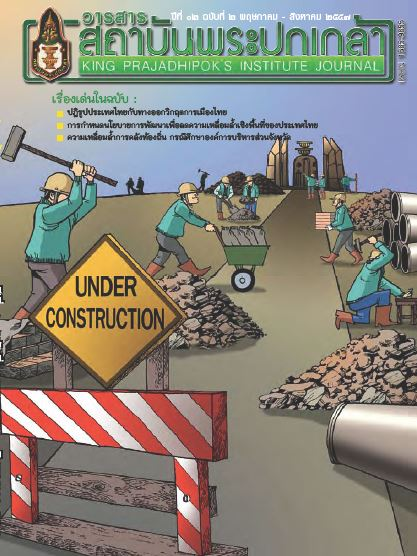 This study revealed several achievements in flood management of Nonthaburi Municipality. The first factor was having a protection and mitigation plan that was developed via risk evaluation and promotion of  understanding and awareness of protecting and mitigating the disaster. Second, was the readiness of Nonthaburi Municipality and of its people, their ability to dwell in the basin area of Chaophraya River basin area, having of flood management plan, and preparation of officers for handling flooding. Third, having of management system for emergency situations like floods, crisis management, promoting collaboration for flood management, communication system in time of crisis, establishing of command center and sanctuary for victims. And fourth, having appropriate post-crisis management, treatment and care, and compensation for
victims. The problems and obstacles in flood management of Nonthaburi Municipality were, firstly, the limitations of laws related to procurement. During the incident, Nonthaburi Municipality could not comply with the laws. Secondly, problems in garbage collection, if handled inappropriately, could cause refuse to accumulate then magnified to be a health problem for the community in the long run. Thirdly, there was a lack of
instruments and manpower in time of crisis. As a result, there was discord over the allocation of sandbags. Fourthly, the flood barriers leaked continuously. Fifthly, there was a problem concerning safety of lives and property, with people concerned enough about their belongings that they were willing to put their lives at risk. And lastly, there were problems in delivering compensation.

The suggestions for sustainable flood management of local governments were, first, to have planning of flood management, flood prevention and mitigation, preparation for flood management, management for crisis situations (flooding), post-disaster management. Second, leadership in time of crisis could help decision making. Third, there should be collaboration-building with a variety of sectors involved in flood  management. Fourth, a sanctuary area should be prepared. Moreover, there were three remarks arising from this study. First, the study advocates the idea of expanding localism for handling difficult problems as much as possible. Second, politicians have a responsibility to their people. Third, local areas should be professionally managed. And last, there should be networking in local administrations.