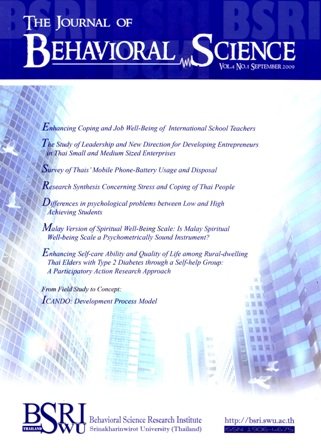 The purpose of the present study was to develop adapted Malay version of Spiritual Well-Being Scale and examine its psychometric properties and prepare percentile norms. 278 undergraduate students in years 1 – 4 (80.60 % female) voluntarily filled out the scale during their regular class hours. They aged 21.59 years on the average (SD = 1.59). 96.8 % of the respondents were Malaysian. The internal consistency coefficients for full Spiritual Well-Being Scale, Religious Well-Being and Existential Well-Being Subscales were .88, .86, and .81 respectively. Corrected item-total correlations were .34 to .64,.43 to .66, and .29 to .67 for SWB, RWB, and EWB respectively (p < .01). Items exhibited higher correlations with their own subscale than the other subscale showing convergent and discriminant validity. The Spiritual Well-Being Scale correlated significantly positively with Religious well-Being Scale (r = .89, p < .0001) and existential well-Being scale (r = .90, P < .0001). Principal component analysis resulted in four factors as indicated by eigenvalues (1.10 to 6.95) and screen plot. Even two factor solution did not result in simple structure. A few items loaded on both the factors. The overall results indicate that for assessing spiritual well-being of Malaysian university students the Malay version of Spiritual Well-being Scale is a reliable and valid instrument, but it is multidimensional. Percentile norms for university students have been provided. It is expected that locally standardized Malay version of Spiritual Well-being Scale is likely to serve better. Discussion includes implications of the present findings.