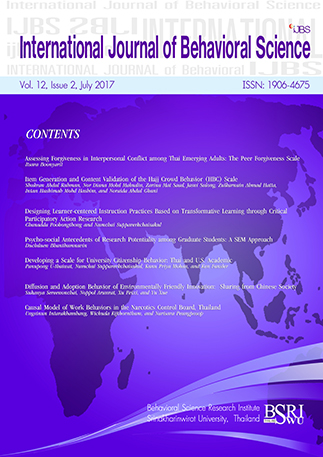 Research training and practice at graduate levels are intended to enhance scientific and systems thinking for future work and life.  In order to promote graduate success in research, antecedents of research potentiality were investigated. Data from 551 Thai graduate students in social sciences and education were analyzed through path analysis technique. Research potentiality was influenced by psychological state, which accounted for 87% of the variance. The most favorable factor in the psychological state was attitudes towards research, followed by scientific reasoning. Furthermore, psychological trait and situational factor directly affected psychological state, which accounted for 89% of the variance. The most important factor for psychological trait was consideration of future consequences, followed by academic habit. The strongest factor in the situational group was guidance and descriptive norm, followed by learning atmosphere. These findings shed light for researcher development in behavioral science and higher education.