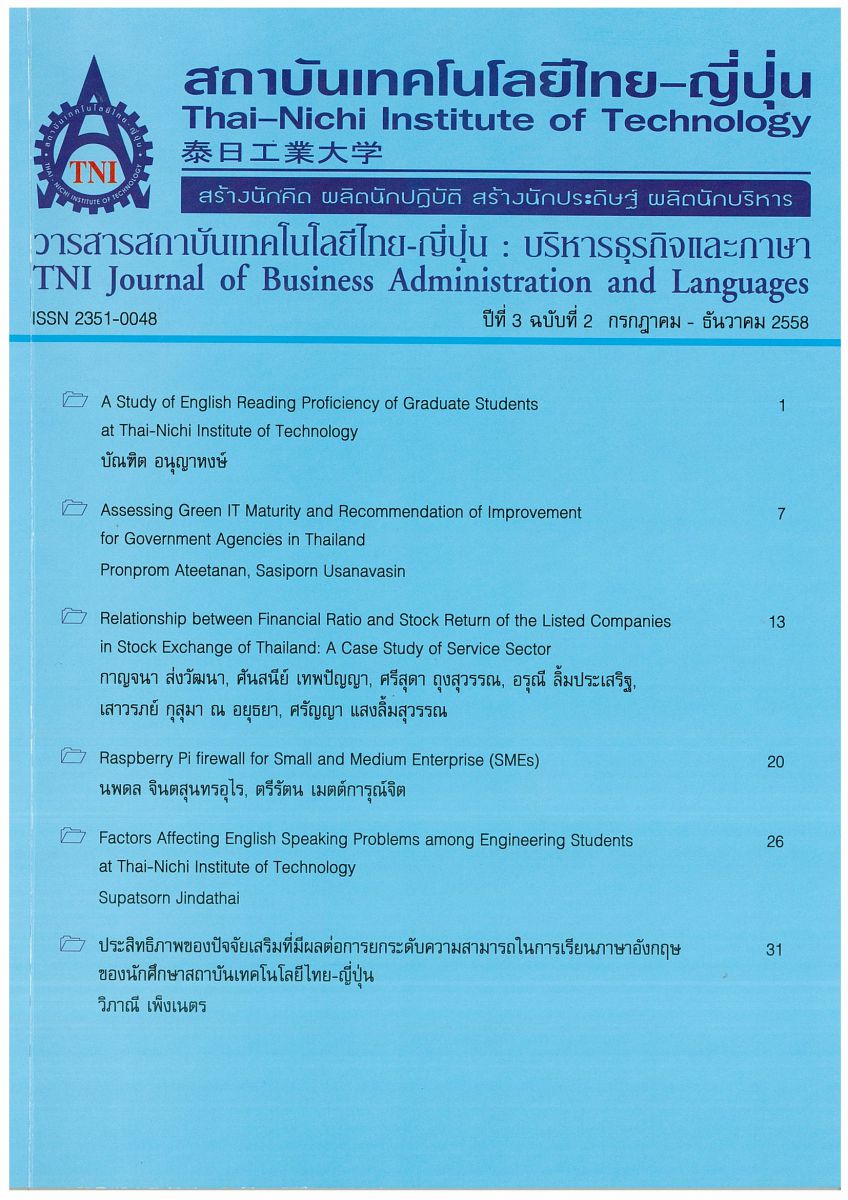 The aim of this study is to identify the factors which affect English speaking problems among engineering students at Thai-Nichi Institute of Technology (TNI). This study looked at five aspects: attitude, motivation, personality, exposure to English, and management in teaching and learning English. The study also examines the comparison of the causes of English speaking problems according to students’ gender. Selfcompiled questionnaires were distributed to 154 first-year and second-year engineering students and conducted during the first semester of the academic year of 2013 at TNI. Stratified random sampling technique was applied. Statistics used for analysing the data were frequency, percentage, mean, standard deviation, and t-test. The  findings showed that the main causes of the students’ English speaking problems were management in teaching and learning English, exposure to English, and personality. These factors were identified at a moderate level. However, motivational and attitude factors were identified at a low level of problem. This present study discusses these findings and makes implications for increasing students’ opportunity to acquire a higher level of English speaking proficiency.

The editorial board of Thai-Nichi Institute of Technology is pleased to receive articles from lecturers and experts in the fields of business administration, languages, engineering and technology written in Thai or English. The academic work submitted for publication must not be published in any other publication before and must not be under consideration of other journal submissions.  Therefore, those interested in participating in the dissemination of work and knowledge can submit their article to the editorial board for further submission to the screening committee to consider publishing in the journal. The articles that can be published include solely research articles. Interested persons can prepare their articles by reviewing recommendations for article authors.

Copyright infringement is solely the responsibility of the author(s) of the article.  Articles that have been published must be screened and reviewed for quality from qualified experts approved by the editorial board.

The text that appears within each article published in this research journal is a personal opinion of each author, nothing related to Thai-Nichi Institute of Technology, and other faculty members in the institution in any way.  Responsibilities and accuracy for the content of each article are owned by each author. If there is any mistake, each author will be responsible for his/her own article(s).

[21] H.S. Lubega, “The effect of the nature and amount of exposure on language: a study based on English language proficiency of students in six Uganda schools”, Diss, University of York, 1979.