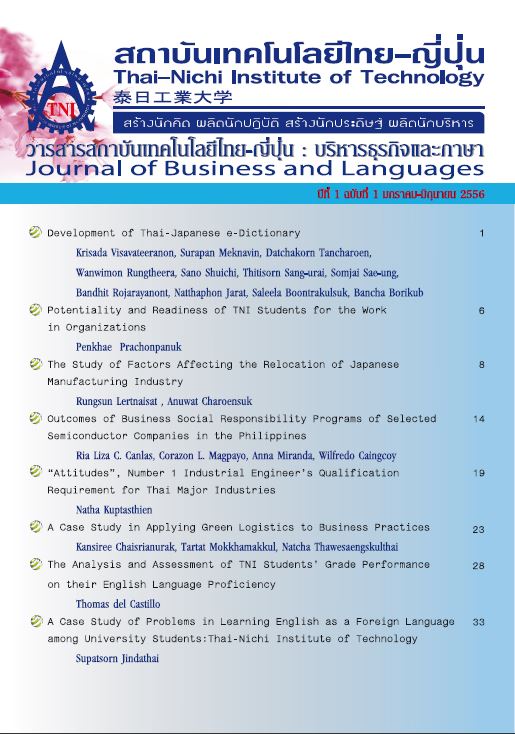 The economic integration in the East Asian region was witnessed in many occasions and their interdependence has been unquestionably strengthened and deepened since 1970s. Since the original ASEAN five nations [1] had shifted their policy stance more favorably toward export promotion from the import substitution [2], although some differences in speed and degree in commitment among those nations were acknowledged, nonetheless the regional trade performances demonstrated the rapid expansion of the volume of exports and imports. In along with this development, the foreign direct investment (FDI) has been attracted, thus many multinational corporations started intensifying their presence in the region. One of the economies to seize the opportunity of this trend was Japan. In fact, the 1970s became the beginning stage of the Japanese internationalization [3]. Large number of corporations, especially in manufacturing industries, large as well as medium, sought more business opportunities outside Japan. Learning wages getting higher and appreciating currency value of yen were the primary motives to encourage or often enforce them to cultivate any possibility abroad. Many Japanese corporations placed ASEAN nations as for their high priority destination toward their international strategic operations.

The editorial board of Thai-Nichi Institute of Technology is pleased to receive articles from lecturers and experts in the fields of business administration, languages, engineering and technology written in Thai or English. The academic work submitted for publication must not be published in any other publication before and must not be under consideration of other journal submissions.  Therefore, those interested in participating in the dissemination of work and knowledge can submit their article to the editorial board for further submission to the screening committee to consider publishing in the journal. The articles that can be published include solely research articles. Interested persons can prepare their articles by reviewing recommendations for article authors.

Copyright infringement is solely the responsibility of the author(s) of the article.  Articles that have been published must be screened and reviewed for quality from qualified experts approved by the editorial board.

The text that appears within each article published in this research journal is a personal opinion of each author, nothing related to Thai-Nichi Institute of Technology, and other faculty members in the institution in any way.  Responsibilities and accuracy for the content of each article are owned by each author. If there is any mistake, each author will be responsible for his/her own article(s).

[1] The ASEAN was officially formed in 1967. Indonesia, Malaysia, Philippines, Thailand and Singapore are the founding member countries.

[2] The failure of the import substitution policy was reported by various cases in the South American nations. After various experiments in some sectors, most of the ASEAN nations swiftly shifted to the export promotion policy stance.

[3] Kokusaika is the term in Japanese, probably corresponding to internationalization process. After confirming the export expansion, the Japanese government and business community became so serious to go abroad. The whole process in Japan of the 1970s is described in S. Odano, “Ups and Downs of Japan and Emerging Asian Economies”, The HikoneRonso, the Economic Society of Shiga University, No. 389, Autumn 2011, pp. 004-021.

[4] A lot of similarities in social and cultural backgrounds are acknowledged. Also, the stability in the social and political areas was highly appreciated by the Japanese businesses. Because of these circumstances, many Japanese tourists have been visiting Thailand.

[5] It was constantly reported by media even in Japan that the threat of flooding approaches minutes by minutes to the industrial parks and greater Bangkok area at that time.

[6] The shocking news in the Japanese businesses was that the production of the vital electronics products for Christmas sales was enforced to temporarily terminate due to the shortage of essential parts from Thailand.

[8] Exception was only Singapore in the Southeast Asian countries.

[9] Green revolution was widely discussed in the 1970s. One of the widely cited publications on this issue is: HlaMyint, Southeast Asia’s Economy: Development Policies in the 1970s, New York, Praeger Publishing, 1972.

[10] There is no established definition on the notion regarding the takeoff. Around 1970s, many economists, especially in the policymaking circle, assume that the take-off can be attained at the level of per capita GDP around US $1,000.

[11] For example, Toyota started the knock-down operation in Indonesia and the Philippines soon after the ASEAN formation.

[12] Student movement erupted in Thailand and Indonesia. Their anti-Japan movements in fact affected the official visiting of the Japanese prime minister to each capital city in 1973.

[13] Many economists are interested in the interaction between trade and FDI. Among many outputs, the followings may be some good references in this area of study. Aizenman, J. and I. Noy, “FDI and Trade-Two Way Linkages?”,NBER Working Paper Series, #11403, June 2005. And for the empirical research outputs, see, for example, Chaisrisawatsuk S. and W. Chaisrisawatsuk, “Imports, Exports and Foreign Direct Investment Interactions and Their Effects”, Asia-Pacific Research and Training Network on Trade, UNESCAP, Working Paper Series, No. 45, October 2007.

[15] Data source is explained in the appendix at the end of the paper.

[16] Efficiency in the financial economics assumes that the current prices fully reflect all the available and relevant information. See, for example, the paper by Eugene Fama, “Efficient Capital Markets II,”Journal of Finance 26 (1991), pp. 1575-1617.

[17] Trade dispute issues, especially between Japan and the U.S., were so intense throughout 1960s up to 1990s. General picture of the process is well summarized in Dennis J. Encarnation, Rivals Beyond Trade, America versus Japan in Global Competition, Cornell University Press, 1992. Related to this issue, it has been argued that the yen currency has been long kept undervalued. See some theoretical and empirical research outputs, for example, Richard C. Marston, “Real Exchange Rates and Productivity Growth in the United States and Japan” in Real-Financial Linkages among Open Economies, pp. 71-96, (eds.) Arnde, S.W. and J.D. Richardson, The MIT Press, 1987.

[19] Although Japan was criticized by many trade partners regarding the trade imbalance issues, it has to note that she had been suffered the persistent trade deficit problems up until 1965.

[20] The history of the dollar is well summarized in a little book by Craig Karmin, Biography of the Dollar, Three River Press, 2009.

[21] From the U.S. perspective, the issue is now how sustainable the U.S. trade deficits would be in the foreseeable future. C. L. Mann explains her view on this issue, in Is the U.S. Trade Deficit Sustainable?, Institute for International Economics, September 1999.

[22] It is generally understood that almost policy instruments, from monetary and fiscal options, were exhausted. Thus Japan has been placed in the dilemma situation.

[23] After 1990s, China emerged as the major destination for the Japanese investments. However, it is often debated lately that the new strategy, China plus one, would be very important and crucial to sustain the global operations throughout the Southeast Asia. Thailand is once again assessed positively, in addition to Vietnam, with respect to this strategic approach.