Pali and Sanskrit have long been blended in Thai language since Sukhothai Kingdom. They have been utilized in written and spoken languages and also in naming people. As a consequence, Pali and Sanskrit have strong influences on Thai language in various aspects for instance sounds, words and their formation, idioms and styles, sentence composition, and orthography which has been found in many Thai words.

Orthographic influences of Pali and Sanskrit on writing Thai in lexical level revealed into 8 characteristics including 1) writing excessive letters for each word, 2) writing letters with Thantakhat–the mark of silent letter, 3) writing with no -ะ mark in the middle of the syllable or word, 4) writing  ั-ย and ไ-ย incorrectly, 5) writing ๘ on Pali or Sanskrit loanwords, 6) writing with some particular scripts on Thai, 7) writing with folk Etymological concept, 8) writing with incorrect analogy. 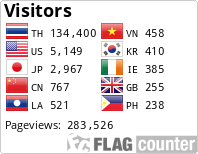