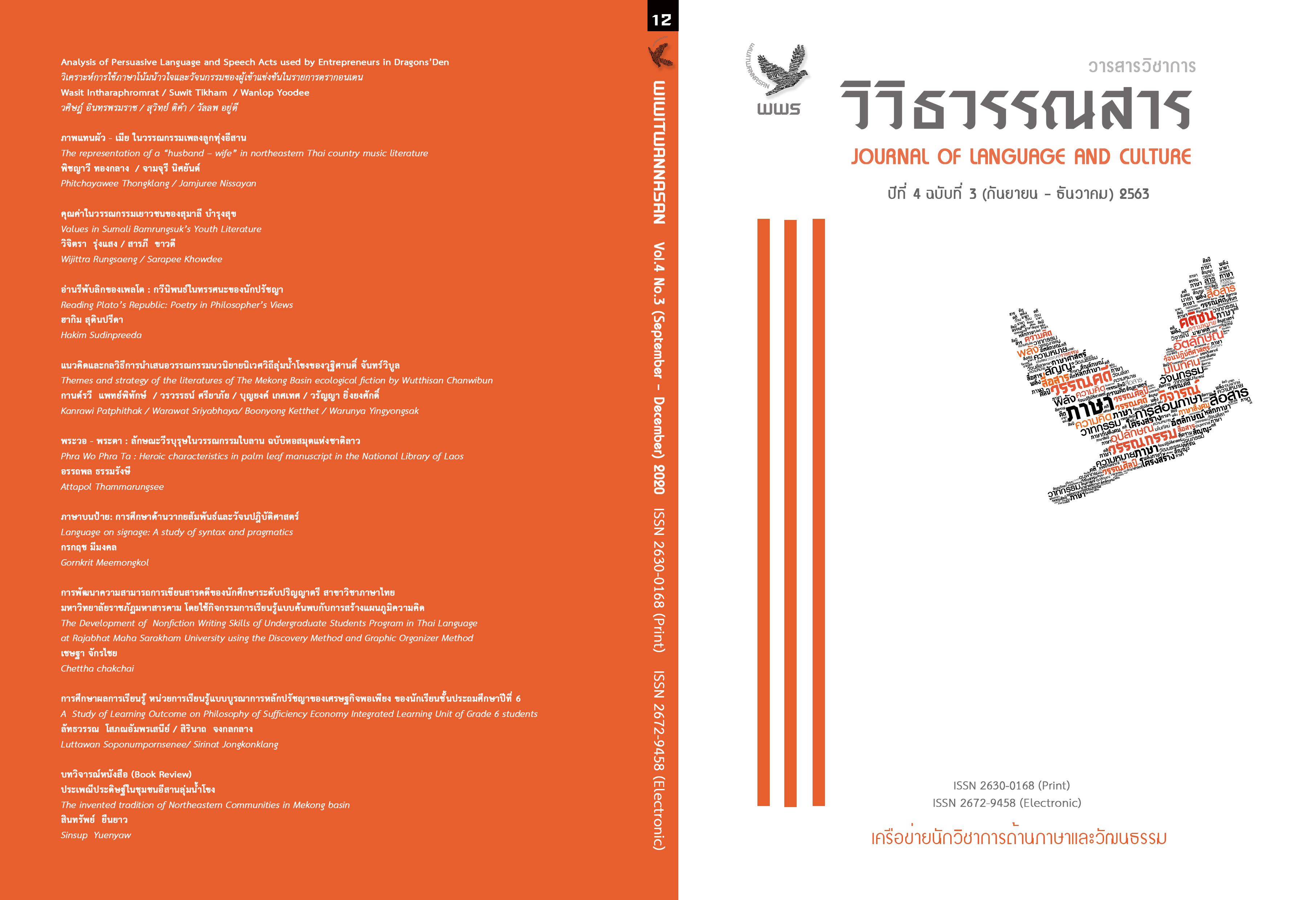 This volume of the academic journal Wiwitwannasan is the 3rd issue of the 4th volume, (September – December, 2020), consisting of 10 academic articles, research articles and book review. While analyzing the contents, they can be classified into 3 categories as follows: 5 articles related to literary criticisms, 3 articles focused on language strategies, and 2 articles on language and culture teaching.

Articles that focused on literary criticism were varied according to variety of taste; If interested in literary work on evaluation, the reader must read an article ‘The values in Sumali Bamrungsuk’s youth literature,’ where the researcher discovered three value of youth literature in this study, namely, emotional value, value of cultivating morality and ethics and the value of knowledge.

If the reader wanted to read literature aimed at analyzing local lifestyles, beliefs and cultures, it is necessary to read concepts and strategies for presenting ‘Themes and strategy of the literatures of The Mekong Basin Ecological Fiction by Wutthisan Chanwibun,’ where the researcher has discovered the concept and method of presenting the famous novel.

If the reader were to interest in analyzing the literature of Thai country song, the reader should not miss ‘The representation of a ‘husband – wife’ in northeastern Thai country music literature,’ where the researcher found that Thai country music is not just an entertainment instrument only but also producing meaning of a language that creates,
represents and reflects the already existing meaning of objects, people and events. The language of the song also serves to express the composer's
intention.

For reader interested in the ancient documents such as palm leaf manuscript, the article on ‘Phra Wo Phra Ta : Heroic characteristics in palm leaf manuscript in the National Library of Laos.’ The author had edited, studied and found that Phra Wao-Phra Ta is an important person in the past related to the history of some localities of the Lao People's
Democratic Republic. Significantly, it is important to the study the history of Nong Bua Lam Phu Province as well as the history of the people of the Northeast region of Thailand.

It also provided a book review ‘The invented tradition of Northeastern Communities in Mekong basin.’ The result of this study revealed the complexity of the way of thinking and the dynamics of traditions including the origin, format, content, Ideology, and interpretation Including power and discourses embedded in the traditions of the Isan Mekong
community.

The articles on analyzing language strategies that reader must not miss either are ‘Analysis of Persuasive Language and Speech Acts used by Entrepreneurs in Dragons’Den’ and ‘Language on signage: a study of syntax and pragmatics’ which confirm that language is all purpose-built. Humans exhibit some deliberate language behavior such as asking for
information, warning of the danger that may arise, threating not doing things that we don't want people do, even convincing us to do what we want. Even if the words have their own meanings, but to use it in any sense, it is freedom of the user.

In addition, the article ‘Reading Plato’s Republic: Poetry in Philosopher’s Views’ perspective shows the greatness of ancient western philosophers like Plato who are still referred to in almost every science in this country. The power of thoughts and perspectives on poetry, rhetoric, and truth is brought to an endless debate.

It also provides articles on language teaching on ‘The Development of Nonfiction Writing Skills of Undergraduate Students Program in Thai Language at Rajabhat Maha Sarakham University using the Discovery Method and Graphic Organizer Method,’ and the integration of teaching that connected to sufficiency economy in the articles, ‘A Study of Learning Outcome on Philosophy of Sufficiency Economy Integrated Learning Unit of Grade 6 students.’ Is it true that language is a very important intellectual culture? If one were not to continue to practice and empathize, it is not always able to grow up to anyone as well. Is it right or not that "Sufficiency" has become a culture of Thai society and become a value that should be implemented in the youth? All Thai people should learn and practice because "Sufficiency Economy is the foundation of life and the foundation of the stability of the land"

It was expected that all 10 articles mentioned above will help expand perspective and various ideas to readers and the interested persons appropriately, which will lead to the development of one's own academic work that may continue to benefit others.