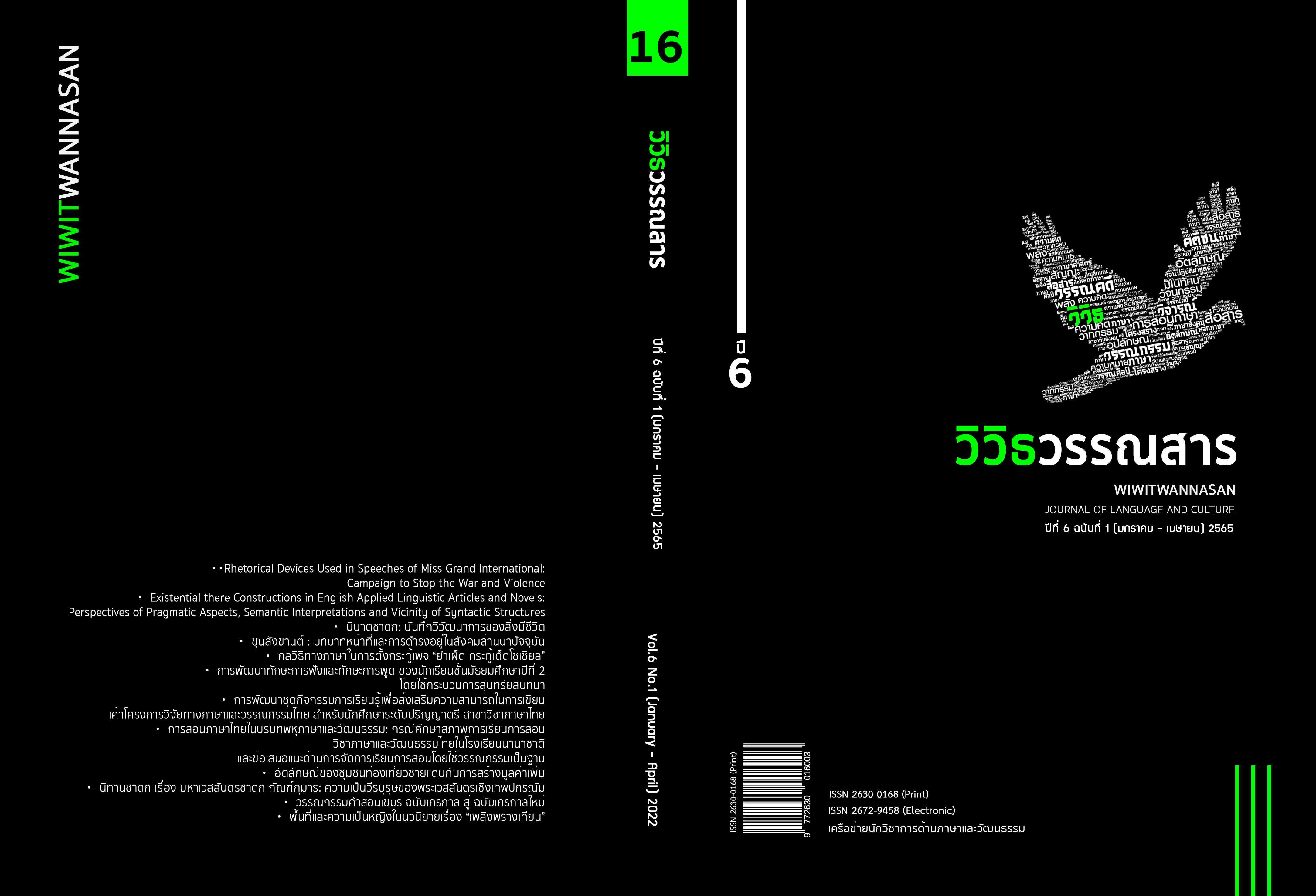 This issue of Wiwitwannasan Academic Journal was the 6th volume, Number 1 (January-April 2022) which contained 12 academic articles and research articles. There were multi-disciplinary contents such as literary analytical studies, discourse analytical studies, Teaching Thai language and folklore studies as follows:

There were 3 literary analytical studies, namely, Nipata Jataka: Records of Evolution of Organisms  was a look at “Jataka” with new tools based on scientific ideas about the evolution of living beings linked to the evolution of the primitive world; The Jataka Tales of Maha Vessantara - Kumara Chapter: The Heroism of Phra Vessantara in the Point of Myth was a look at the Great Vessantara Jataka by applying Joseph Campbell's Mythological Hero's Journey (Campbell, 2008) and Khmer Didactic Literature, Jbab Kekal to New Jbab Kekal was a comparative study of the common characteristics and relationships of the two literatures

There were 3 articles that applied the discourse analytical studies, namely, Linguistic strategies use for setting up a forum page “Yamped Kratoodet Social”, Space and Femininity in the Novel ‘Phloeng Phrang Thian’ and an English article focused on Rhetorical Devices Used in Speeches of Miss Grand International:  Campaign to Stop the War and Violence.  These linguistic strategies in these articles were all a form of action in society to convey meaning or a purpose to create meaning to things around us.

There were 3 articles on teaching Thai language, namely, The Development Listening and Speaking Skill of Grade 8 Students through the Dialogue. Teaching Thai in a Multicultural Context: A case study of Teaching and Learning Conditions of Thai Language and Culture Courses in International Schools and Recommendations on using Literature-Based Approaches and Talent Promotion in Research Proposal Writing on Language and Thai Literature by Development of Learning Activity Package for Undergraduate  Students Majoring in Thai Language  All these 3 articles reflected the missions of those who were directly responsible for the Thai language and teaching Thai language that will pass on Thai language skills to learners at various levels.

The study of folklore consisted of 2 articles: 1) Khun Sangkhan : The Role and the Existence in Lanna Society in the Present Day. It was an attempt to analyze the roles, duties and existence of Khun Sangkhan in modern Lanna society in beliefs that have become traditions and rituals, and 2) The Identity of Border Tourism Community and Value Addition. It made the wisdom of the community as an internal value to the value adidition for tourism.

Besides, there was also an English article that aimed to investigate on the structure of language that was related to semantic intepretation entited ‘Existential ‘there’ Constructions in English Applied Linguistic Articles and Novels: Perspectives of Pragmatic Aspects, Semantic Interpretations and Vicinity of Syntactic Structures’.

The editorial team would like to thank the experts for their kindness and critique of the article in order to get quality of articles with academic value, and thank all contributors of the articles for trusting us to be your vehicle to bring your message to the reader.