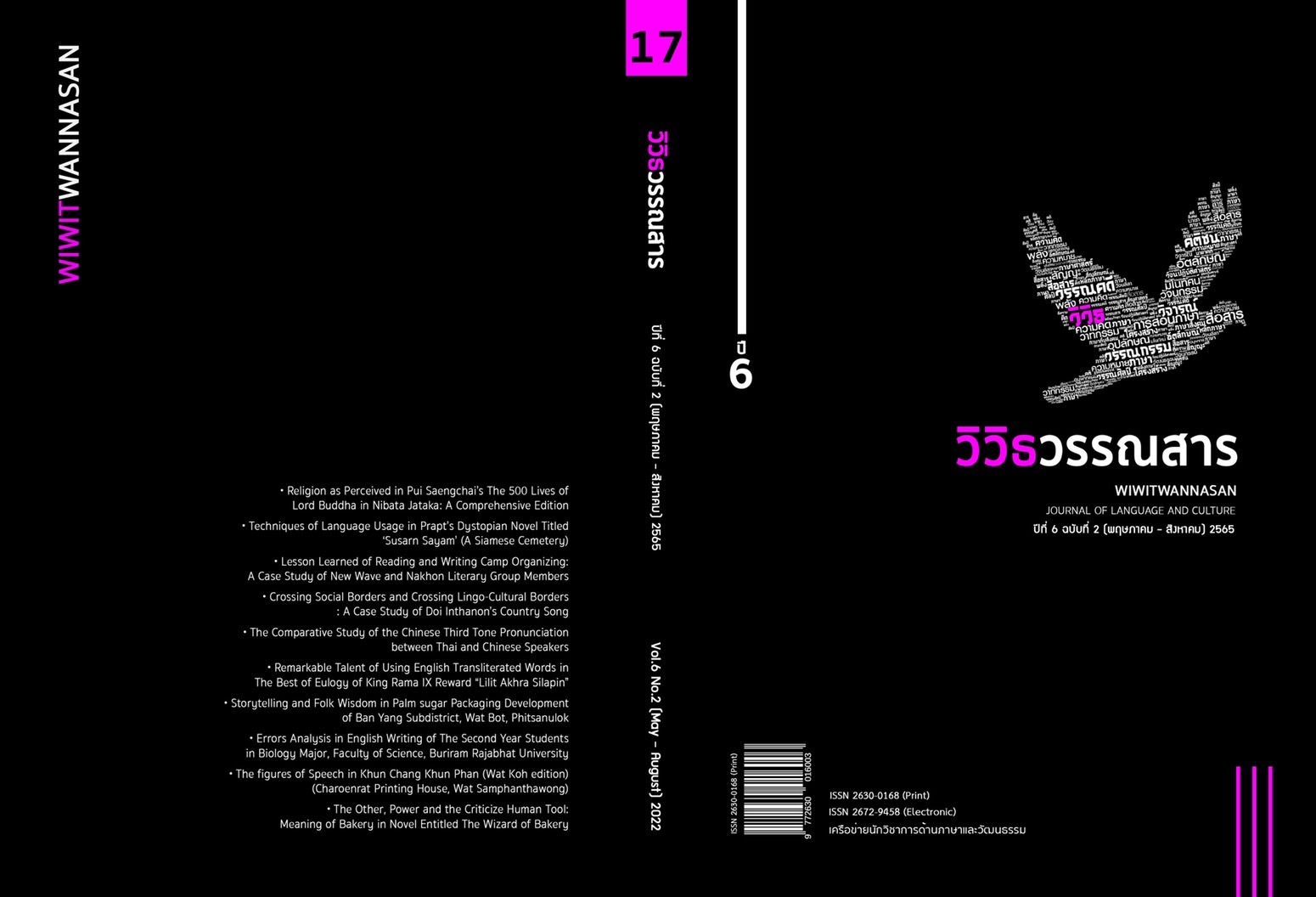 This issue of Wiwitwannasan Academic Journal is the 6th year, 2nd issue (May-August 2022) consisting of academic articles and research articles in total of 10 topics, which are divided as follows: one article on analysis of religions from Jataka: Religion as Perceived in Pui Saengchai's the 500 Lives of Lord Buddha in Nibata Jataka: A Comprehensive Edition. A religious character from the Jataka of 500 Lives of Buddhas revealed that apart from faith in gods, humans also need intellectual reasoning to explain things around them. There are three articles on analysis of strategies for using language: Techniques of Language Usage in Prapt’s Dystopian Novel Titled ‘Susarn Sayam’ (A Siamese Cemetery), Remarkable Talent of Using English Transliterated Words in The Best of Eulogy of King Rama IX Reward “Lilit Akhra Silapin”, and The figures of Speech in Khun Chang Khun Phan Wat Koh edition (Charoenrat Printing House, Wat Samphanthawong). The aforementioned articles are not only an analysis of language strategies that appear in the literature, but also the linguistic tactics contributed to the incredible realism of literature, show the author's linguistic genius, also help to open up ideas for readers to be aware of stories that occur in society that stimulate the creation of literature. There are two articles on the development of reading and writing: Lesson Learned of Reading and Writing Camp Organizing: A Case Study of New Wave and Nakhon Literary Group Members. It reflected that the organization of the reading and writing development camp for the members of the New Wave Literature Group and the Nakhon Group. Looking back over the past 10 years, it has been reflected that the camp organizing group not only learn that they should be flexible, strict, and focus on stimulating each person's happy imagination, but also found that a number of members were strengthened. Both played a significant role in driving the camp. Errors Analysis in English Writing of The Second Year Students in Biology Major, Faculty of Science, Buriram Rajabhat University, was not intended to point out the flaws of the learners, but focuses on the study of mistakes in order to improve the students’ English writing skills later in the day. There are two articles on study of country song and folklore as a valuable cultural force and adding value: Crossing Social Borders and Crossing Lingo-Cultural Borders : A Case Study of Doi Inthanon's Country Song, and Storytelling and Folk Wisdom in Palm sugar Packaging Development of Ban Yang Subdistrict, Wat Bot, Phitsanulok. It is worth noting that country songs as cultural wisdom and tales of folk wisdom are all important forces in communicating, understanding, disseminating and contributing to arts and culture to a society that has sentimental values. They can also create business value from these wisdoms. In addition, there is also one article aimed at the study of tonal pronunciation according to linguistics, namely, The Comparative Study of the Chinese Third Tone Pronunciation between Thai and Chinese Speakers and one book review: The Other, Power and the Criticize Human Tool: Meaning of Bakery in Novel Entitled The Wizard of Bakery. The editorial team would like to thank the experts for their kindness and critique of the articles to get quality of articles with academic value and thank the authors of the articles for trusting us to be thier vehicle to bring thier message to the readers.