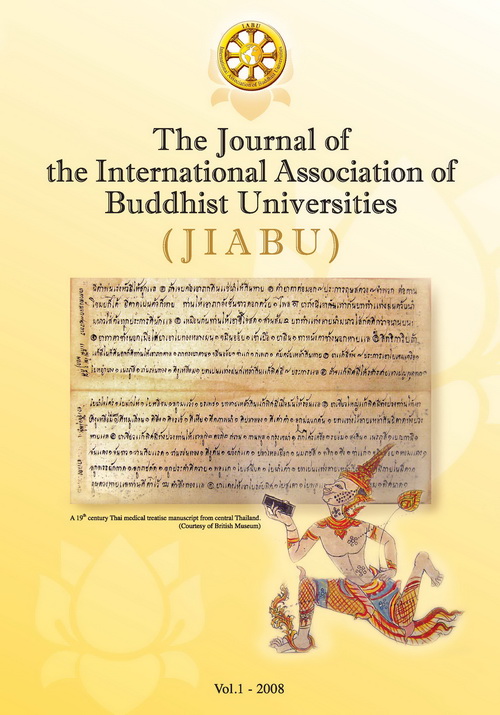 The International Association of Buddhist Universities, IABU,
is a new grouping in the world of Buddhist Studies and higher
education. It is only a year old and still in its formative periods.
The IABU was born of sustained collaborations between Buddhist
leaders and scholars from all over the world who began meeting in
2004 in Bangkok to mark the United Nations Day of Vesak, UNDV,
celebrations.

Mahachulalongkornrajavidyalaya University, MCU, of which
I have the honor of serving as its rector, has been privileged to witness,
in fact, play a crucial part in initiating and subsequently hosting
the UNDV for four years between 2004-2007. The UNDV has
brought the Buddhist world closer than before. For this, we thank
the Thai Supreme Sangha Council of Thailand for its blessings and
guidance. We are also grateful to the Royal Thai Government for its
constant support.

Apart from the UNDV, Mahachulalongkornrajavidyalaya
University has also taken the responsibility to host the Secretariat
of the IABU and finance its operation for the first year. In January
2008, in its first regular meeting, in Bangkok the IABU Executive
Council decided to hold an international conference on ethics and
Buddhism and a summit during that conference and to publish
an annual academic journal of a high standard.

Thinking of Foundations and Justification of Buddhist Ethics

Science, Ethics and the Buddhist University

The Music of Life: a systems biology view of Buddhist concepts of the self/no-self

Manuscripts and Education in Northern Thailand and Laos (1569-1920)

Human body, spirit and disease: the science of healing in 19th century Buddhist manuscripts from Thailand