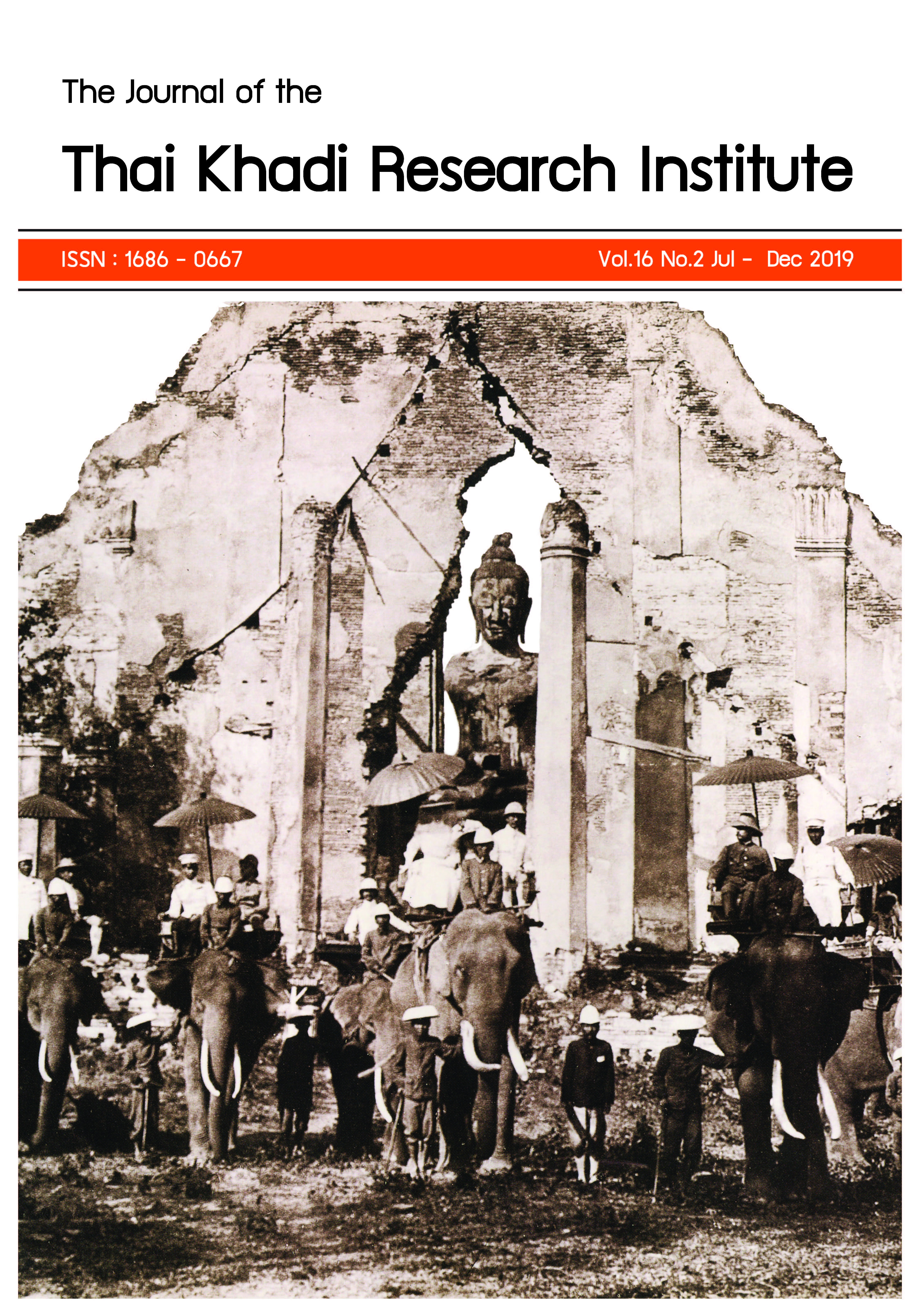 This is Volume 2 of the Journal of the Thai Khadi Research Institute in its 16th year of publication. In this edition, readers will enjoy a variety of articles such as the study of the perception of Ayutthaya period history in the eyes of people in the early Rattanakosin era, the Historical Arts on how to determine ages of chedi or pagoda through the influence of architectural styles, the Anthropology study on identity changes for undertakers or “ Burner of Human Corps”, the study on the evaluation of cultural capital values on temples and ancient monuments through the concept of ICOMOS, as well as the study on the dimension of policy communication for tourism in Thailand. Readers will see that the essence appeared in this Journal of the Thai Khadi Research Institute have reflected the creation of contemporary academic field studies and other different methodologies that build up the knowledge on “Thai Study”.

to King Rama V: A Documentary Research on Literature and Official Documents” by Nichapa Thichakornsakul. It is the study on worldview and perception of people during an early period of Rattanakosin period on Krung Sri Ayutthaya – the old capital city. The study was conducted through researching literatures, documents, and other evidences. It was found that people of the early Rattanakosin period saw Ayutthaya as the vanished -old capital city especially people’s view from the first three (3) reigns of Rattanakosin Era when the new capital city was established. The main focus points of early Kings were on building Bangkok – the new capital city – to be more beautiful and stable. However, the perception of Krung Sri Ayuttaya from the elite group showed different aspects which reflected politics in the royal courts, especially the conflicts between “The Front Palace” and “The Rear Palace” in the reign of King Rama 1. During the reign of King Rama 3, Sri Ayutthaya would mean Bangkok. This view reflected how people in that period saw the glory of Sri Ayutthaya even though it was destroyed. The newly built capital city had its grandeur and splendor just like the old Sri Ayutthaya. Then came the reign of King Rama 4 when people regarded Sri Ayutthaya as the old city which was the foundation of Siam. Therefore, the King placed importance in the restoration of the old city in order to show to the west during the invasion for colonies that Siam had long history and civilization. The King also wanted to show to the world how close the ties were between Ayutthaya Dynasty and the new Chakri Dynasty.

The next article is on “Chedi at Wat Hua Khuang in Prae Province: The Study of History and Architectural Style” by Nantaporn Poommanee. This is the study that gave insight into the concept that there were many major cities in the north of Thailand that built prominent monasteries with the name “ Wat Hua Khuang”. Most of such monasteries would be located on the northern side of the city’s courtyard or the city center. However, there were no clear nor fixed architectural styles of chedi in each compound of Wat Hua Khuang. People will see the diversity in architecture that resulted from local preferences and other influences at certain times. For example, the chedi of Wat Hua Kuang in Chiang Mai province was built in the bell shape on an octagonal base while chedi of Wat Hua Khuang in Lampang and Nan provinces were in the shape of castle roof top. Some of them were built with Burmese style architecture such as Wat Hua Khuang in Lamphun province. As for the chedi in Wat Hua Khuang in Prae province, it was found that the architectural style was in the shape of round bell on three- tiered base adorned with stucco of lotus blossoms in circular plan. It was developed from chedi at Wat Phra That Hariphunchai in Lamphun province during the period of 21st to 22nd century B.E. It was believed that the present style was from the major restoration during the reign of King Tilokaraj of the Mangrai dynasty around the end of the 20th century B.E. Such style influence also related to the Lanna history during the period of Chiang Mai – Lamphun (Mangrai dynasty) under King Tilokaraj who had expanded the influence to Prae province until Prae had became a part of Lanna. The Chedi at Wat Hua Khuang in Prae Province, therefore, signified the beginning of Lanna style bell-shape architecture that had influences on other chedis in Prae province.

The third article is on “The Changes of Identity of Undertakers in Urban Communities in Nakorn Si Thammarat Province” By Damrongphun Jaihowweerapong , Kettawa Boonprakarn, and Nattapong Jitniratana. The researchers studied the anthropology dimension on “Identity Politics” of small people who are less privileged under the power structure of Subaltern which, in this case, were the “corps burners” or “undertakers”. The study found that the identity of undertakers had changed because of the socio-economic context. For example, in the old times when cremations took place on funeral pyre in an open area using firewood to burn corps, undertakers’ identity were of low class people with intimidating looks who consumed food from Buddhist temples, who slept in funeral areas, who had bestiality with dogs, who used blankets from dead persons, who chanted an incantation of black magic rituals, and who believed in animism and supernatural, etc. However, the identity of undertakers had changed over times. They had fought and negotiated for the change of relations in power in the dimension of “Identity Politics”. At present, the identity of undertakers are shown as professional group of people with decent jobs, not the low class people. They emerge with new identity as the undertakers who put on suits to perform rites of cremation. They are highly skilled in the management of funerals. Every ritual step that they perform shows that they are the professional service providers for customers. Undertakers in the new era use Facebook and Line application to communicate and provide services to people. However, no matter how modernized they are, they still adhere to strict traditions, and rules. They still keep performing old rituals and ceremonies while preserving the key identity of “Undertakers”.

Then, there is an article on “Khongkharam Temple, Ratchaburi Province, Value of Tangible Cultural Capital and Direction for Promoting the Temple as a Learning Center of Mon Culture in Thailand” by Sirot Pinanratchathon. This is the study on Tangible culture which applied the concept of ICOMOS to evaluate the value of Tangible culture in four (4) categories. They are 1) Historic Value , 2) Aesthetic Value, 3) Scientific Value, and 4) Social Value. Results from the study show that Khongkharam Temple of Ratchaburi Province has been a center of a large Mon people community in Ratchaburi province since the early Rattanakosin era. The temple houses numerous arts that are related to Mon people’s culture. For example, there are pagodas in the style of Mon architecture, mural paintings in the main chapels (Ubosoth), murals in the sermon hall, as well as murals inside the Thai house of 9 rooms which are the monks’ chambers, and in Local museum of Mon people. All of these are cultural capital of Tangible culture. They have historic, aesthetic, scientific and social values. They provide the potential knowledge that can be used to promote the Khongkharam Temple as a learning center of arts and culture of Mon people in Thailand. The promotion of the learning center is with the concept of historical arts which will create knowledge and understanding based on scientific approach.

The last article is on “TAT Communication Policy and the Adaptation of Communities in Phang Nga and Trang Provinces to Discover Thainess Campaign” by Kawin Sing-in. The study explained the general picture of communication policy laid out by the Tourism Authority of Thailand (TAT) to promote the “Discover Thainess Campaign” as declared in the National Agenda since 2015. The objectives of the campaign were to accelerate quality tourism, and to showcase “Thainess” as the selling point to draw more revenue from tourism. Furthermore, the campaign aimed at strengthening local communities by distributing more income. The “Thainess” campaign is also under the concept of “Thailand 4.0” which aimed at creating the “Tourism 4.0”. The concept focused on driving grass root economy with tourism innovation. For selected communities in Phang-Nga and Trang Provinces, they showcased “Thainess” with emphases on “Old Towns” and “Fishing villages”. It was found that these communities adapted themselves to embrace tourism. For example, the revival of the distinctive Baba heritage, the revival of traditional dresses and authentic local food culture to glorify the feeling of “Nostalgia” for the past. As for the local fishing villages where Muslim people dwelled, it was found they open their houses for the Home Stay business to showcase their ways of life. They also presented Muslim culture as parts of tourism activities. However, when the Tourism Communication Policy is considered, it can be concluded that the “Discover Thainess” policy was very much a “Top- Down” policy. It did not focus on the participation of people in local communities as it should have been done.

This Journal of the Thai Khadi Research Institute also presents book reviews on “Memories du comte de Forbin, Chef D' Escarde, Chevalier de L'Ordre Melitaire de Sainte Louis by Chevalier de Forbin” ( Translated by M.C.Damras Damrong Devakula) as commented by Doungrak Chantang. There is reading recommendation for the book titled “Restoration and Preservation of Thai Mural Paintings in Myanmar at MahaThein Daw Gyi Temple and Kyauk Twa Gyi Phaya” by Sirot Pinanratchathon. Another reading recommendation is for the book “The Royal Barge Procession along the City’s River on the Occasion of the King’s Royal Coronation Ceremony 2019” by Asa Kumpha. These are the works carried out in the second half of the year 2019 by researchers and working team of the Thai Khadi Research Institute. In addition, there are news of academic and cultural activities that were organized by the Institute during the period of June – October 2019. Compilation and the summary of content derived from those activities are prepared for readers to enjoy.

Finally, our Editorial staff hopes that the Journal of the Thai Khadi Research Institute will be a platform and a meditator in dissemination and exchanges of knowledge on “Thai Study” where people can find academic answers and solutions which will be beneficial for society. We also wish that this academic Journal will receive continued support from interested public

Ayutthaya in Rattanakosin Era From the Reign of King Rama I to King Rama V: A Documentary Research on Literature and Official Documents

Chedi at Wat Hua Khuang in Prae Province: The Study of History and Architectural Style

Khongkharam Temple, Ratchaburi Province, Value of Tangible Cultural Capital and Direction for Promoting the Temple as a Learning Center of Mon Culture in Thailand