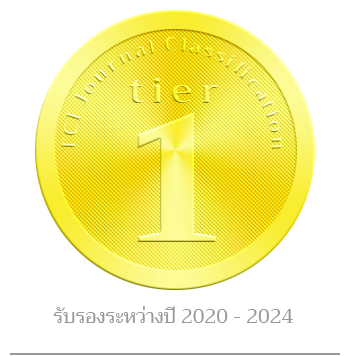 The Journal of the Thai Khadi Research Institute is an academic journal published twice a year (1st issue January - June, 2nd issue July - December). It aims to promote research and disseminate academic and research articles on Thai studies focusing on social science, history, religious, art and culture. Articles are refereed by professional peers. Views and opinions expressed in this journal are not necessarily those of the editors or editorial board, but are of individual contributors. 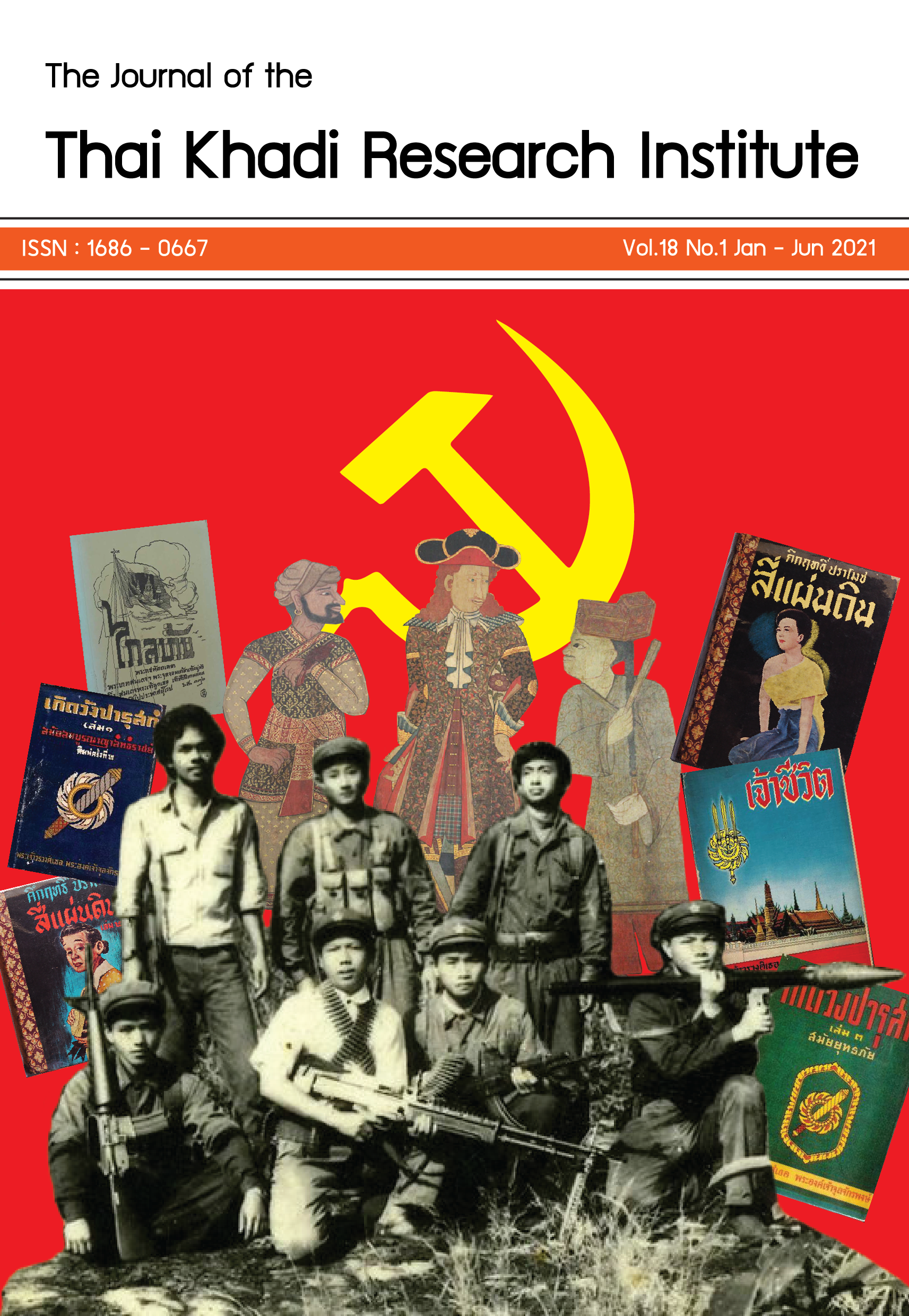 The Journal of the Thai Khadi Research Institute Vol.18 No.1 presents research articles on varied subjects and issues on “Thai studies”, among which are “former comrades” memories, intellectual historical studies on royal activities and book culture in the past, policy recommendations for the reformation of local administration, sociological studies on the world of stray-dog owners and Thai traditional medicine for cancer treatment.

A War of Memories and the Changing Notion of the Past of “Former Comrades” from 1977 to 2015 (B.E.2520s - 2550s) by Thikan Srinara A study and explanation of changes in thoughts of those who took arm and joined the Communist Party of Thailand (CPT) in their fight against Thai State through the analysis of their “memoirs” written during 1979 and 2015. Findings show changes in the narratives and memories in relevant to Thai politics and other circumstances. Starting from a romantic revolutionary life in memoirs written between 1976 and 1979, the comrades’ thoughts turn negative after the collapse of the CPT. Memoirs written after May 1992 through 1997 express changes from negative to positive thoughts, which eventually unfold into “valuable life experiences” in the latest memoirs. The flow of thoughts in memoirs not only represents the self-explanation of former comrades in different times but also give an explanation of the “Octobrists”, thus making contributions to “Octobrist studies”.

Definition of the Meaning of an “Old Thainess” in the Reign of King Rama III by Pavena Mu-ubon In attempt to re-interpret the reign of King Rama III within the intellectual historical study framework, the author points out that the political instability resulted from power competition among leading figures, associated with social changes, especially the mobilization of a large number of ethnic groups such as the Laos, Khmer and Mons to the Chaophraya River basin, makes it necessary for the King to establish his “hegemony”. By defining the meaning of “Thainess” in the “Old Siamese” concept, King Rama III was “Dhammikarajathiraj” who ruled over the ethnic groups, and, more importantly, exercised hegemony power over his relatives and the nobles. Nevertheless, the meaning of “Thainess” in King Rama III’s era is totally different from “Thainess” that the elite in absolute monarchy era tried to build.

Thai Book Culture during the Reign of King Rama IV to the Early of King Rama IX’s Reign: A Case Study of Semi-Academic Pocket Books by Wanaporn Pongpeng This article is another example of intellectual historical study exploring “Thai academic book culture”. Major findings reveal that all academic books are produced by cultural elites, writers of royal family members, and elite scholars during three consecutive periods of time: Siam encountered colonialism, Siam after the 1932 revolution and Siam after World War II. It was also found that political influences on social science and humanities books are obvious, resulting in a continued production and distribution of books in these disciplines in attempt of inherit the ideology of “Thainess” in support of state ideologies. This was not the case of books in science and technology. It can be said that as cultural and political elites are knowledge pioneers who conceptualize and write books in Thai society, according to the saying that “Knowledge is power”, to dominate through book culture is possible.

The World of Stray-dog Owners: Life Experience, Points of View and Meaning by Nisa Sukprasert This article portrays stray-dog owners’ true colors, which differ from the old negative image of alienate, grimy, causing trouble and annoyance to the society. Actually, there is a process of being stray-dog owners, starting from the encounter of stray-dogs with some problems or in trouble and “deserve assistance”. After adopting the first dog and being experienced, it is possible that the next stray-dog (s) will follow. Stray-dog owners share some commonalities: they believe that keeping stray dogs at home is one way to help the society and other beings, thus making a merit. Usually, they are supported by families, and, more often than not, encounter a considerable amount of friction from neighbors. Stray-dog adoptions have brought many changes to the owners’ life, work schedule, leisure, and income allocation, in addition to providing space for their living. It’s the happiness that they choose because, for them, “stray dogs are more than just a pet”.

Factors Influencing Decision for Thai Traditional Medicine Treatment for Cancer, Treatment Results and Quality of Life of the Patient at the Jitmetta Mercy Foundation for Cancer Patients of Thailand (JFCT), Petchaburi Province by Thammarat Tuy-on, Ponlawat Maki and Arunporn Itharat The research results reveal that three major factors affecting cancer patients’ decision are information from former patients who completely recover, the patient’s opinion and family support, whereas two auxiliary factors are the patient’s knowledge and their experiences in Thai herbal medicine and Thai traditional medicine treatment. Most importantly, they are confident and have positive attitudes towards herbal medicine despite the fact that there’s still no scientific approval of their effectiveness. The factor that helps facilitate the treatment is the patient’s cooperation in taking a good care of themselves.

Book review in this issue deals with King Prasat Thong, Coup d’etat, Righteousness, Rituals and Arts written by Pitchaya Sumjinda. In his review, Kongsajja Suwanpetch presents the book’s critical issues and draws connections between the author’s ideas and other academic works. One example is the controversial issue of “Big Buddha Head”, whether or not it is the head of Phra Si Sanphetdayan, a gigantic image of Buddha which is the main object of veneration within the royal chapel of Ayutthaya.

Brief reports on academic, art and cultural activities organized by the Institute during January and June, 2021 and information about the oncoming national conference on the occasion of the 50th anniversary of the Thai Khadi Research Institute are available in the Journal.

It is hoped that the Journal of the Thai Khadi Research Institute will be a forum and mediation for dissemination and exchange of knowledge on “Thai studies” that benefit the academic community and the general public as well. Any contributions to the Journal, either article submission or readership, are highly appreciated.

Thai Book Culture during the Reign of King Rama IV to the Early of King Rama IX’s Reign: A Case Study of Semi-Academic Pocket Books

The Past, Present and Directions for the Future: The Relationship between Local Political Officials and Officials of Local Administrative Organizations in Thailand

The World of Stray-dog Owners: Life Experience, Points of View and Meaning

The Journal of the Thai Khadi Research Institute