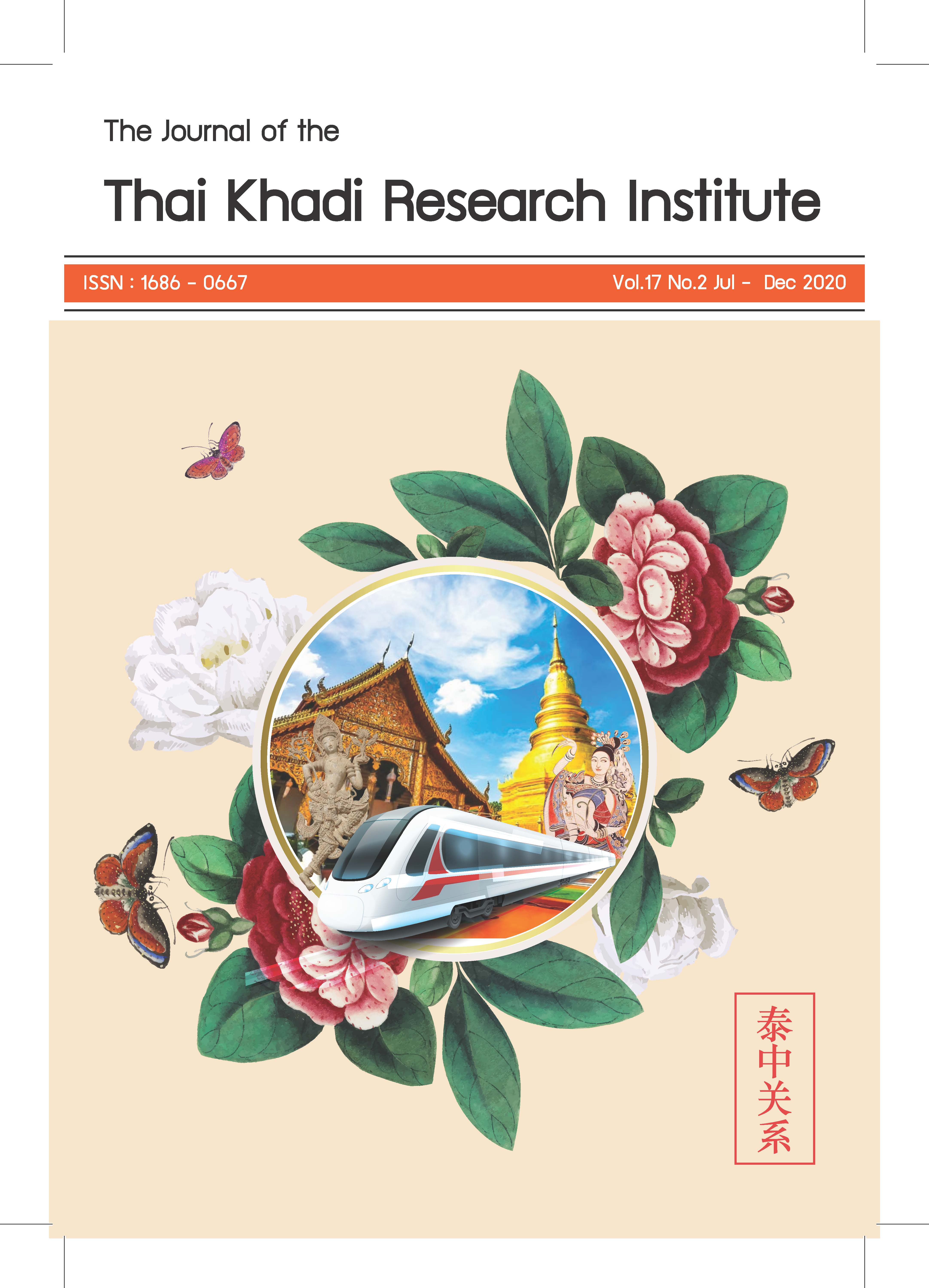 At present, the importance of ‘China’ or ‘the People’s Republic of China’ (PRC) to Thailand is undeniably increased, owing to Thailand’s internal order, should it be in its international policy or in its designation of   China as ‘the most important major power’. Within a closer relationship context, the body of knowledge on ‘Chinese studies’ in Thailand and Sino -Thai relationships is in constant flux, subtle, thorough and diverse, as     exemplified by three articles on different aspects of ‘China’ in the Journal of the Thai Khadi Research Institute Vol.17 No.2.

The Constuction of Knowledge on Sino - Thai Relations and the Application of Frontier Approach to the Studies of Sino - Thai Relations through the Exploration of Xie Yuanzhang’s (Cheah Yanchong) Life by Sitthithep Ekasitthipong. This article is intended to be an experimental case for the use of the ‘Frontier approach’ in Sino-Thai diplomatic relations study through the life and works of Cheah Yanchong (Yanyong Jiranakorn). In fact, since the late 1920s Chinese scholars have produced academic works opposing Thai History of Nan-chao version in an attempt to contend that Nan-chao is not the state of the Tai speaking ethic groups believed to be ancestor of the Thais. With his background as an overseas Chinese who  returned from Thailand to motherland, Xie had proven to be a good asset to the Communist Party in the integration of the Tais as part of Chinese by convincing from his Tai studies perspectives that Tai society and culture had their origin in ancient Chinese civilization. It is noteworthy that the knowledge constructed by Xie is in response to both Thailand and China’s needs. For China, the emphasis of Chinese civilization influence over the Tais is in line with the idea that the Thais and Chinese have some          connection, at least in cultural aspects. For Thailand, the adoption of   Chinese civilization by the Tais enhances ‘the definition of the Thai nation’ under   racial assimilation concept in which Chinese are included as part of ‘Thainess’, while the outdated academic perspective of proper Thai is   denied.

Although the Sino - Thai diplomatic relations started officially in 1975, the importance of China to Thailand has significantly increased since the late 1990s and a closely relationship between the two countries has been established since 2014. Obviously, Thailand has been moving into Chinese geo - political influence area while stepping away from that of the United States under the ‘Turning Right to China’ policy articulated by Taksin Shinawatra government (2001 - 2006) and accelerated by the     National  Council for Peace and Order (NCPO) (2014 - 2019). Thailand - China High - speed Railway Project: Prospects for Northeastern      Thailand Development by Hongpha Subboonrueng and Jintavat Sirirat is an  evidence of Sino - Thai relations under the NCPO government. The study reveals that although the project with a railway line passing through Northeastern Thailand and linking Thai - Lao frontiers in Nong Khai province is not likely to be financially viable, the Thai authorities have indicated their willingness to proceed in order to continue friendly relations with China after Thai military coup in 2014 and the subsequent boycott          of Western countries, and in accordance with the national strategies of regional development.

The Social Relations Change of the Hokchiu Chinese: A Case Study of the Hokchiu Chinese in Nabon District, Nakhon Si Thammarat Province (1925 - Present) by Sireethorn Thawornwongsa. A study on the transformation of the social relations and identity of ‘Hokchiu Chinese’ capitalists who have migrated from British Malaya to settle and pioneer rubber plantation in southern Thailand for over a century. The result shows that the Hokchiu’s social relations change is associated with the coming of commercial - based production and capitalism as well as the gradually strengthening relations with Thai authorities. This includes the classification of villagers into three groups: rich, mediocre and poor, with a clear - cut  division of labor; the shift from ‘Tua Hia - Luok Nong’ to ‘employer–employee’ relations; the phase out of ‘Kongsi’ or Chinese partnership in production system; and the connection with Thai identities which lessens the intensity of traditional social grouping. Although the traditional social relations remain only in the form of social and cultural organizations, the Hokchiu Chinese make use of these organizations to open up trade and investment in rubber business with the PRC. Meanwhile, the PRC foresees opportunities to contact overseas Chinese capitalists in different regions through social and cultural organizations.

Besides those three articles on ‘China’, two more articles are     published. The Recently Constructed Lanna: The Social History of the Upper Chao Phraya Basin (1932 - 2014 A.D.) by Pinyapan Pojanalawon. Inspecting northern Thailand history while reversing the acknowledgement of the region through ‘internal colony’ glasses, the author points out that changes in northern Thailand during the past 8 decades have been      directed by the central government. This includes the rise of ‘the North’ after the fall of Monton Payap, the formation of the North after World War II, the North under ‘cold - war colonization’, the process of becoming ‘Lanna’ and centralized Chiang Mai; all of which feature Lanna history and identity as humble, rich in culture, non - resistance and reverie. Within the context of liberal democracy expansion, political conflicts among color shirts, regionalism, etc., however, Lanna has constructed a new form of political consciousness and consequently new identities which could be described as resistance and aggression.

Mani ‘Sakai’: Representations, Ethnicity and Marginality by Apichaya Kaewuthai. This article deals with the marginalization of the ‘Mani’ or ‘Sakai’ through daily newspaper and documentary discourse. Findings show that most representations of the Mani ‘Sakai’ in daily newspaper discourse are negative: they are a minority who leads an outdated ways of life, needs help and development. Meanwhile, the representations in documentary discourse show some positive aspects such as their deep connection to forests. The negative representations in both types of discourse clearly indicate that the Mani ‘Sakai’ are inferior to the majority of people in the country and are thus marginalized through deprivation,    restriction and weakening.

It is our hope that the Journal of the Thai Khadi Research Institute will be a forum and mediation for dissemination and exchange of knowledge on ‘Thai studies’ that benefits academic communities and the general public as well.