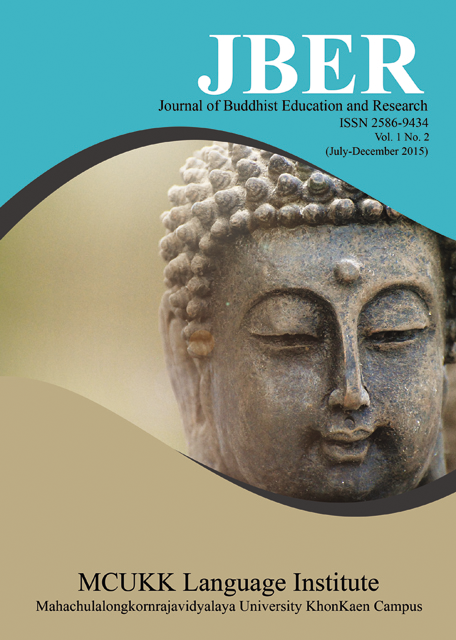 
The purposes of this research were: 1) to study the history of Lao People’s Democratic Republic of Laos, 2) to study the relationship of society and culture of Buddhism towards people of Lao People’s Democratic Republic of Laos, and 3) to analyze the tendency and Buddhist direction with development of society and culture in Lao People’s Democratic Republic of Laos. This research was a qualitative research, studying on documents, interviews, group conversations, and unofficial observations, then, analyzing on those contents.
The research results were as follows. 1) Lao PDR was regarded as a country which was strongly in the relations towards culture and religion as yet. Buddhism reached to Lan Chang Kingdom in the age of Queen YodFah, King’s principal consort who used to respect Buddhism before. When in Khom she saw the population worshiped to ghosts and deities, and sacrificed by killing animals, she asked the favor from King FahNgum to bring Buddhism to propagate in Lan Chang Kingdom. Therefore, Buddhism was spread firstly in Lao PDR and got well-patronized from the King. Later, Buddhism was very prosperous in the reign of King Setthathirath according to build approximately 120 temples in the city and importantly Wat Phra Kaew where Emerald Buddha placed. In that era, many literatures were composed, for instance, Sung Sin Sai, Kareketh, and Phra Luck Phra Ram etc. Buddhism caused the unity in Lao as well as was the foundation of culture, tradition, thoughts, and belief towards Laos. In addition, monks were dependent to consult for people and the temple was the center meeting for villagers and official.
2) In terms of social and cultural relations of Buddhism towards Laos, it was really involved in life style as well as people in Northeast Part of Thailand that held the tradition called Heet Sib-song and Klong-Sibsi (Intimacy and Sharing) of Isan lifestyle values for making merit to ancestors and requite to the nature and holy things in creating happy lives. Monks were the leader to make a temple as a center of community as “a constitution of living” which enhanced cultural relation of Laos for stable lives.
3) The tendency of producing the relation and cooperation in terms of Buddhism and culture of Laos after its administration was changed, affected the Laoclergy on converting the way to administrate its system conforming to the modernization. In propagating Buddhism, Lao clergy cooperated with other countries to send monks to study abroad, under the approval of the president of the Loa Fellowship of Buddhists, and when graduated, those monks would back to develop the country. Moreover, many Buddhism colleges were built in Lao PDR. Presently, Lao clergy has provided many projects to enhance youth and population in meditation such as, building moral school, organizing the ceremony to get ordained in summertime, Dharma tour, and praying the sermon in holy days etc.