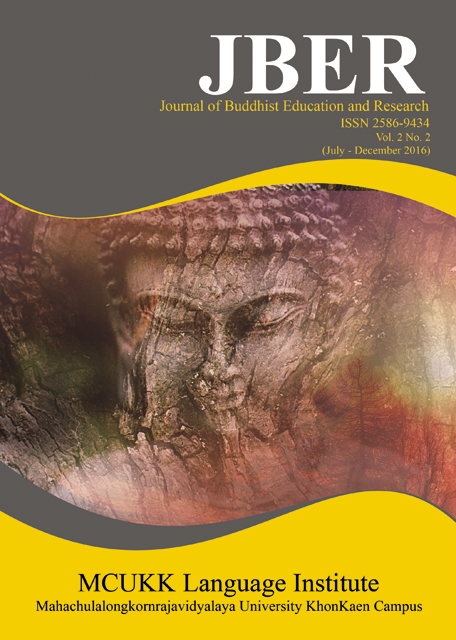 The Research paper “the intellectual development in the way of Buddhist ethics of the Meditation center of Probannontan temple, Naimuang Sub-District, Muang District, Khonkaen Province” had three main purposes : (1) to study the concept of intellectual development in the way of Buddhist ethics, (2) Factors contributing to the intellectual developmentoftheMeditation center of Probannontan temple, Naimuang Sub-District, Muang District, Khonkaen Province, and (3) to analyze the effects of the intellectual development of the Meditation center of Probannontan temple, Naimuang Sub-District, Muang District, Khonkaen Province
The result of research found that the intellectual development in the way of Buddhist ethics must adhere to the principle of a threefold processes to achieve the ultimate goal of life starting from the main precepts or regulations to be right speech, to be right action, and to be right livelihood. It is guided and directed the actions of assembly tasks to successfully achieve good. Then raised to the level of concentration or mental training process, to develop mental consciousness to be balance between body and mind, it is a process of advocating for getting things into your life away with high efficiency. And the last is the intellectual or cognitive processes, it is a way of training for knowledge and wisdom, it has resulted in attitudes, beliefs, and values the right idea, it is a process that can develop high intelligence and self-control in the various conditions took the life as well.
The intellectual development in connection with the Noble Eightfold Path found that the Intellectual development in the way of Buddhist ethics arose from the three levels of the development process: the wisdom of the listening, the wisdom of the idea, and the wisdom of mindfulness meditation. The wisdom arising from the mindfulness meditation is considered the most advanced intelligence, as it is a creative way to come up with their own intelligence through processes embarked practice meditation, until the revelation of the cause of the problem and can solve it by them. In order to achieve this highest wisdom, it relies primarily on threefold through links with Noble Eightfold Path that was the introduction to the Noble Eightfold Path is the practice to only three categories that is a group of morality, a group concentration, and a group of intelligence. So that the lead threefold to perform a process, it has to follow the Noble Eightfold Path. In the way of Buddhist ethics constitutes a comprehensive intellectual development, that is, to follow the Middle Path, in the first of all, practitioner must have seen the right way before, then seek worldly wisdom, and then develop a higher level of intelligence to achieve the highest wisdom or  Nibbana.
The result of intellectual developmentintheway of Buddhist ethics of the Meditation center of Probannontan temple found that the Probannontantemple Used the four foundations of mindfulness(Four Satipatthanas) as a guide in the intellectual development to the monks novices and people, by focusing on the understanding of the tools of physical, mental, mind, and Dhammas (mindfulness of the body, mindfulness of feelings or sensations, mindfulness of mind or consciousness andmindfulness of Dhammas). The main effect of bringing the Stipatthana4 to use in everyday life found that: Knowingly making a state of emotion that comes with an external impact can be improved to be good, Knowingly makingto understand the state of the real life, adherence to make things less, make turned himself in to learn more, can adapt itself to a changing world better, do not knowingly disturbed state of mind is not enslaved by temptation that will lead to a deterioration in life, know what to do and should not do., knowing what is right and wrong, Known as a way of avoiding deterioration, and behave in the principle of morality.