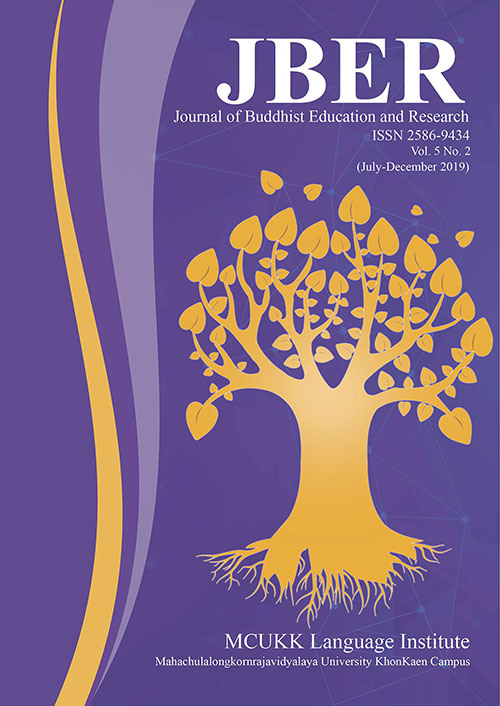 The aims of this research were: to study the history and background of Pagodas (or cetiya) in Theravada Buddhism and those in Khon Kaen, Roi-et and Mahasarakham provinces; to analyze their value towards the ways of life of people in the provinces. This study was carried out by means of qualitative research and the data were collected from the relevant documents and research, survey and interviews before being analyzed and synthesized. The researched information was presented by means of the descriptive analysis based on inductive reasoning principles.

According to the history and background of Pagodas in Theravada Buddhism, the pagoda is a building or Stupa, a place that contains relics of the Lord Buddha or to enshrine Buddha images or to perform worship. There are 4 types of Pagodas: 1) Dhātu-cetiya: stupa enshrining the Buddha’s relics; 2) Dhamma-cetiya: a doctrinal shrine; 3) Udddesika-cetiya: a shrine by dedication i.e. relics; 4) Paribhoga-cetiya: stupa enshrining the things used by the Buddha.

Based on the study of the history and background of the Pagodas in in Khon Kaen, Roi-et and Mahasarakham provinces including 1) Phrathat Kham Kaen, Cetiyabhumi temple, Bankham sub-district, Nampong district, Khon Kaen province; 2) Phrathat Kaennakhon, Nongweang temple, Mueangkoa sub-district, Mueang district, Khon Kaen province; 3) Phrathat Upamoong, Phudinci temple, Bhosrisawang sub-district, Pontong district, Roi-et province; 4) Phramahacedhichaimongkol, Phanamtipthepprasitwanaram temple, Nongpok district, Roi-et province; 5) Phrathatnadoon, Nadoon district, Mahasarakham province, it was found that there are inheritance of tourism, traditions, culture, worship of the Pagodas in each province and the connection between the ways of life of the community and Buddhism, to be reputed ‘tourist city of Buddhist way of life’.

For the values of Pagodas on the ways of life of the people in Khon Kaen, Roi-et and Mahasarakham provinces, there are 6 areas as follows: 1) worship as it is a sacred place; the pagoda is a sacred symbol representing the Lord Buddha, Dharma and the monks; 2) a center of the hearts of Buddhists to worship as an annual tradition; 3) pilgrimage and worship of the people; there is a daily pilgrimage; 4) a symbol of the stability of the country, folklore and belief that is a central country's security; 5) maintaining and inheriting Buddhism in each period of every ruler; 6) shrine and antique that record the valuable history of Buddhism, cultures and local traditions.

How to Cite
Visittapañño พ. ., Woramethisrisakul อ. ., & Sudassanavibhãnĩ พ. . (2019). THE VALUES OF PAGODAS TOWARDS WAYS OF LIFE OF PEOPLE IN KHON KAEN, ROI-ET AND MAHASARAKHAM PROVINCES . Journal of Buddhist Education and Research, 5(2), 239–252. Retrieved from https://so06.tci-thaijo.org/index.php/jber/article/view/242229
Issue
Vol. 5 No. 2 (2019): July-December
Section
Research Article