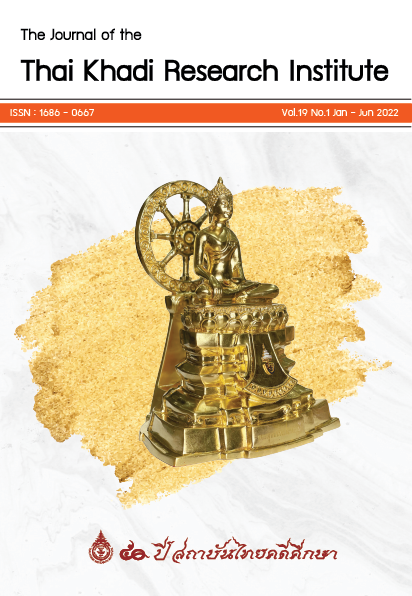 The Buddha Footprint at Adam’s Peak (Samantakuta) of Sri Lanka in Ayutthaya Art by Rungroj Tharungraeng. This article investigates Ayutthaya people’s perspectives on the Buddha Footprint at Adam’s Peak, believed to be imprinted by Lord Buddha on his visit to Sri Lanka. Several artifacts are examined, including stucco high - relief at Wat Pailom in Phetburi province, mural paintings at Wat Putthaisawan in Ayutthaya province and Triphum manuscripts. The position of the footprint in the center of Sri Lanka Island with or without other shrines on the side reflects their highest reverence for the footprint.

Painting of Dasa Jataka: Origin, Style of Arts and Presentation through Concepts of Local Artists in the Upper Isan along the Khong River by Phongsak Akaramatthanakul. This article studies the artistic style and presentation methods of mural paintings of Dasa Jataka in the northeastern region of Thailand. With the combination of local Isan style and traditional style of central Thailand, the painting was created for the first time at Wat Hua Wiang Rangsi, Amphur That Phanom, Nakhon Phanom Province by local artists of Luang Chan Akson group. Murals at Wat Hua Wiang Rangsi is a model for other temples in the area, such as Wat Phuttha Sima, Amphur That Phanom, Nakhon Phanom Province; Wat Latthikawan, Amphur Wan Yai, Mukdahan Province; and Wat Si Khun Muang, Ampur Chiang Khan, Loei Province.

History of Thai Education under the State’s Centralization (1947 - 2019) by Pinyapan Potjanalawan. This article studies the dynamics of Thai educational system under the centralization of coup d’etat governments since 1947. It was found that during the year 1957 - 1973 and 2014 - 2019, the government seized power from education and launched a mega project for the nation’s educational development without people consensus. The reformation of political institution under the 1997 Constitution led to an    educational reform under consensus as well as queries about educational disparity and abuses of students’ right and liberty.

Value Added to Gastronomy Tourism via Teaching and Learning Thai Food by Supharom Prasatkaew. This article compares the recipes of Thai royal food with the recipes of Thai food in cooking classes for tourists. The results show that some recipes have different names but similar ingredients and cooking methods. Cooking classes for tourists always simplify cooking methods and ingredients. Some classes add values by telling myths and   beliefs related to Thai food.

Lao Krung Food, the Cultural Identity of Ethnic Group: A Case Study of Lao Krung in Tambon Huai Duan, Amphoe Dontum, Nakhon Pathom Province by Pradtana Saeueng. This article examines the identity of Lao Krung food, including its authentic recipes and the use of natural ingredients found in the vicinity for cooking. Beyond nourishing the body, some food contains cultural aspects such as beliefs and wisdom of ancestors that inspire unity within the ethnic group. Crucial factors affecting Lao Krung food identity are social and economic changes as well as changes in consumption taste, village environment, agricultural technology, and local markets.

Aesthetics of Thai Scents: A Case Study of Traditional Thai Fragrances by Nalinnath Deesawadi and Watanapun Krutasaen. This article    examines Thai scents aesthetics. It was found that many Thai scents are    produced without original archetype. The prototypes of Thai scents are mostly from foreign countries or synthetic smell of local flowers. Without the understanding of the artistic value of scent creation and scent aesthetics related to cultural experiences, Thai scents are quite cliché.

Chan Chaokha: The Transition onto Post - Siam in Musical Plays Dimension by Chayuti Tassanawongwara and Tharanat Hinon. This article points out dynamics in Siamese art, in particular the transformation from traditional Thai music and performance to Lakorn Rong, a post - Siamese musical plays, under changing political, economic and socio - cultural conditions. The study of Chan Chaokha, a popular musical plays composed by Pranboon shows a compromise between tradition and modernity. While performance was obviously westernized, music reveals the confrontation between traditional Thai music and western music.

What It Takes to Hold Hegemony: The Formation and Expansion of the King's Networks under the Interaction of Thai Elite from B.E. 2490s to 2530s (from mid - 1940s to mid - 1990s) A book review on a newly published book written by Asa Kampha, a researcher, professional level of the Thai Khadi Research Institute specialized in Thai political history, reviewed by Pichaya Koomquan. This book deals with the formation and retention of King Rama IX’s leading power in different dimensions and the establishment of “the King’s networks” in relevant to changes in the networks of Thai elites.

A short article on academic, art and cultural activities organized by the Thai Khadi Research Institute during January and June 2022 is presented at the end of Journal.

It is hoped that articles presented in the Journal of the Thai Khadi Research Institute Vol.19 No.1 respond to academic and public interest,  widen knowledge and encourage more participation in Thai studies.

Painting of Dasa Jatata: Origin, Style of Arts and Presentation through Concepts of Local Artists in the Upper Isan along the Khong River

Home Sweet Home: The Ideas of Home and Family of Thai Middle Class in 1970s

Than the royal hegemony: Unraveling of the royal network under interaction of the Thai elite in the 1947 - 1987 decade